A photographer whose work I respected once advised me to work with as few light control devices as possible.He believed because the less time spent working with my gear, the more time I can spend putting my subject at ease.

Case in point: If you give me a doorway I’ll use it as a prop. Doorways give subjects something to do with their hands as well as—I think anyway—provide a natural frame around the subject adding interest to the portrait.

During this shoot, I often typically a sequence of images—and you should too—not just one and hope for the best. Each pose in a sequence is slightly different while I refine the pose a little each time, rather than making radical changes. Unless nothing works and then I just start all over again. I call this technique Shooting through a Pose and even wrote a post about it that you can read here. 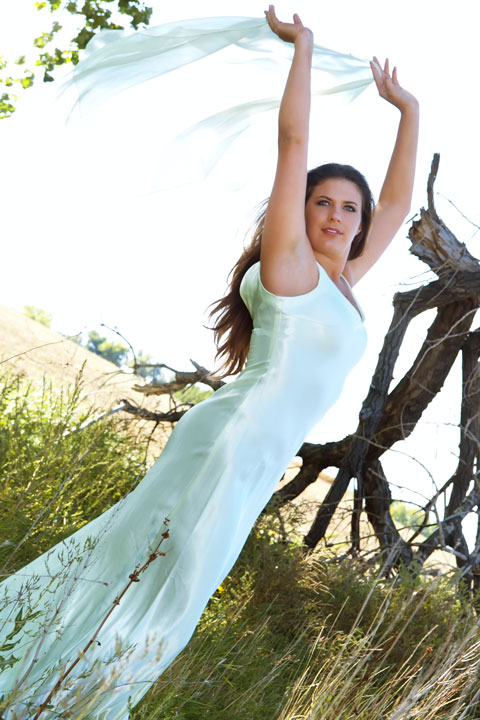 Mary’s version: She was standing in front of that same doorway, which is 180 degree from where I made my shot (top) to get a completely different portrait of the same model at that same location but from a different direction. The matching scarf that the model somewhat hides in my portrait becomes major prop for Mary who made this available light portrait using an Olympus mirrorless camera with an exposure of 1/160 second at f/5.6 and ISO 200.

My book Posing for Portrait and Glamour Photography is available on Amazon with new copies available at from Amazon for $6.50 with used copes starting at $18.92 for some reason, as I write this. Kindle versions sell for $6.39 for those preferring a digital format. Please keep in mind that these prices are set by the publisher and Amazon, not me. And for some reason Amazon sometimes shows a different cover photo than this one.