Shoot high key with a speedlight? I found that it was quite possible to make a high key portrait of my former muse—Tia Stoneman—using a speedlight as I did in today’s featured image. By the way, I’m still looking for a new muse. If you know anyone who might interested in posing for me, have them take a look at this post and/or have them contact me though Contact directly above.

One of my favorite features of DSLRs or mirrorless cameras is the exposure compensation control that lets you increase or decrease the camera’s selected exposure settings in half or one-third stops to fine tune an image’s exposure. To do this you sometimes you have to push two buttons or turn a control wheel but sometimes it’s just a button that’s sitting right on top the camera! 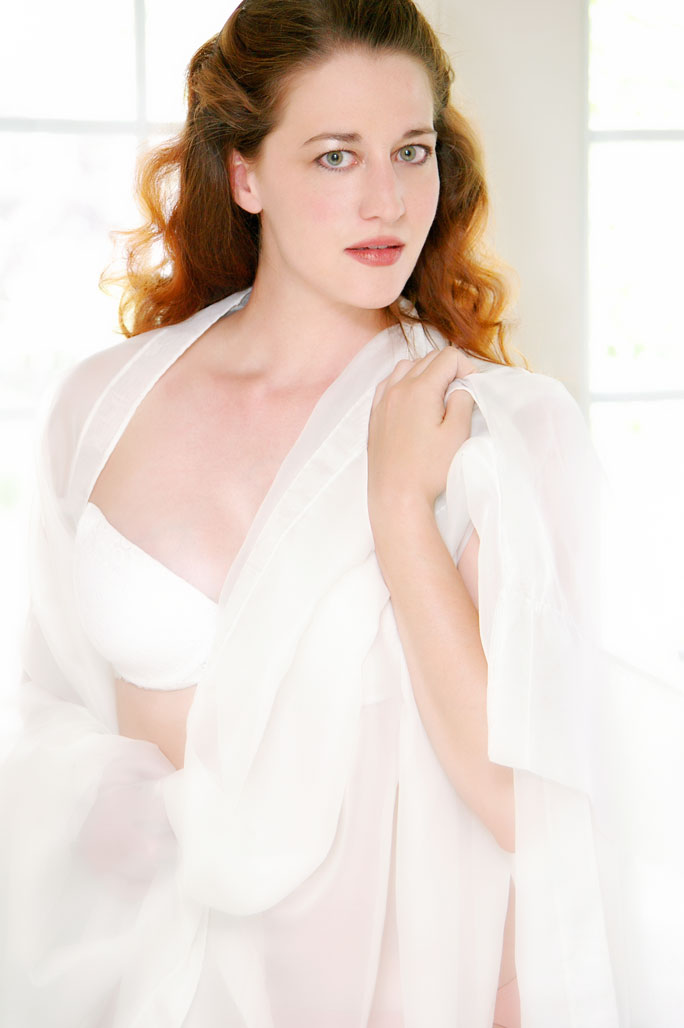 Typically when setting up  an available light portrait, I first make a few test shots. After making these exposures I look at the image on the camera’s LCD screen and check out the image’s histogram. Then I’ll usually make another exposure using the camera’s Exposure Compensation controls to produce the best possible exposure for that particular subject and its lighting conditions.

Some cameras even have a flash compensation feature; this is basically the flash version of exposure compensation that lets you adjust the output of the built-in flash or a speedlight to increase or decrease the light’s intensity to produce the look you want in the final photograph.

How I made this shot: I photographed Tia Stoneman in a North facing bay window in the kitchen of my former home. She’s basically wearing her undergarments and is wrapping herself in some swirly fabric she brought to the shoot. I used a Pentax K100D’s flash compensation mode to increase the amount of flash from a Pentax AF540FGZ speedlight to give this portrait a high-key look. Lens used was a Schneider D-XENON 50-200mm f/4-5.6 at 95mm with a final exposure of 1/125 sec at f/5.6 and ISO 800. The vignette Blur feature of Color Efex Pro was used to add softness to the edges of the photograph.

My book Joe Farace’s Glamour Photography is full of tips, tools and techniques for glamour and boudoir photography and includes information on all of the cameras used as well as including complete exposure data for each image. New books are available from Amazon for $26.92 with used copies starting at $8.86 as I write this, which seems like a bargain. Kindle version is $19.99 for those preferring a digital format.