Digital infrared photographs render landscapes as if they were glowing, moonlit or immersed in an extraterrestrial light because of the nearly white reproduction of most vegetation’s chlorophyll. That’s the good news. The bad news is that exposure meters, either hand held or in-camera, are not sensitive to infrared light. That makes it difficult to calculate exact exposures when shooting infrared either when using on-camera filters or when shooting with a converted camera, as was the case with the featured image below. For example, two subjects that appear equally bright under normal, visible light might reflect infrared radiation at significantly different rates and have different brightness when captured with an IR-converted camera or infrared filters. 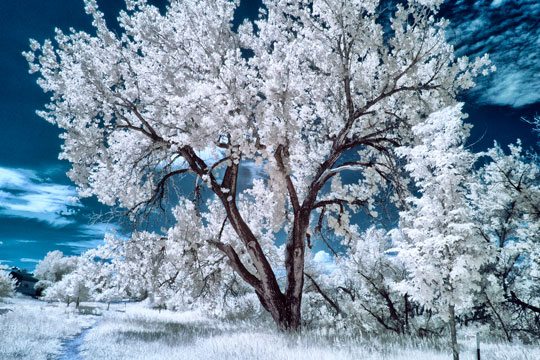 But that doesn’t mean you shouldn’t try, especially since DSLRs and mirrorless cameras provide you with instant feedback via their LCD screen or EVFs.

How I made this shot: I photographed my favorite tree in McCabe Meadows in infrared using a Lumix G6 that had been converted by LifePixel using their Enhanced Color IR Filter (equivalent to 665nm filter.) Yes, I have a favorite tree, not a favorite species and I’m not sure what species this tree is other than it’s old and has an interesting shape. Lens was the Lumix G Vario 12-32mm f/3.5-5.6 at 12mm with an exposure of 1/400 sec at f/11 and ISP 400.

The Panasonic Lumix G6 that was used to make the above photograph it tends to slightly underexpose when shooting landscape image like this one, even though the image on the LCD may look perfect. And because they are based on a visible light spectrum, histograms aren’t always a good indication either. 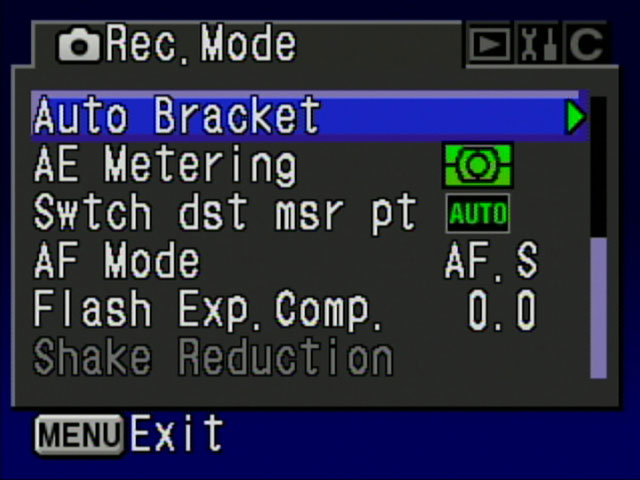 When just getting started in digital IR photography it’s a good idea to bracket three to five different exposures because you can’t count on your LCD screen to show you the exact result when viewing the files on your computer’s calibrated monitor.

Most cameras offer a built-in bracketing function but even if your camera doesn’t have a bracket function it should have an Exposure Compensation control that will let you adjust exposures on one-half or one-third stops while in the various automatic exposure modes. After you get more experience you will learn what you have to add (and probabbly not subtract, but you never know until you try.)  I almost always have to add PLUS one- or two-thirds stop exposure compensation to images shot with this camera.

PS. For tips on creating the above Blue Sky Effect in infrared, click here for a post about that topic.

I’ve found that Life Pixel does a great job with IR conversions and they’ve done conversions for some of my Canon DSLRs as well as all of my Panasonic Lumix G-series cameras, including a GX1 that I converted using their new Hyper Color conversion. This is not a paid or sponsored endorsement, just my experience.