It’s Just a Photograph. Or is it?

Thoughts for Today from Joe Farace

Late in his life Richard Strauss was constantly being approached by adoring fans asking, “what is the story behind this music?” His reply was, “It’s just a piece of music.” Or, as Freud once noted, “Sometimes a cigar is just a cigar.”

I’ve always believed that photography was the universal language but that doesn’t mean that during these 150 years we didn’t evolve a language of our own. And every now and then it changes. One of the more interesting examples is that sometime during the 1930’s the meaning of ‘burn’ and ‘dodge’ in the darkroom swapped meanings. Don’t know how or why that happened but it did.

And for reasons known only to Theia, Greek goddess of sight and the shining light of the clear blue sky, some people have escalated the ‘take a picture’ or ‘make a picture’ argument by tossing the epithet ‘nice capture’ around as a way of complimenting a photographer’s image as if they were chasing butterflies instead of the light.

Anyway, all of this stuff popped into my head as I was pondering a comment about one of my car images that I posted on social media and in which a commenter asked if he could see the photograph straight out of the camera and not the processed image that I posted. 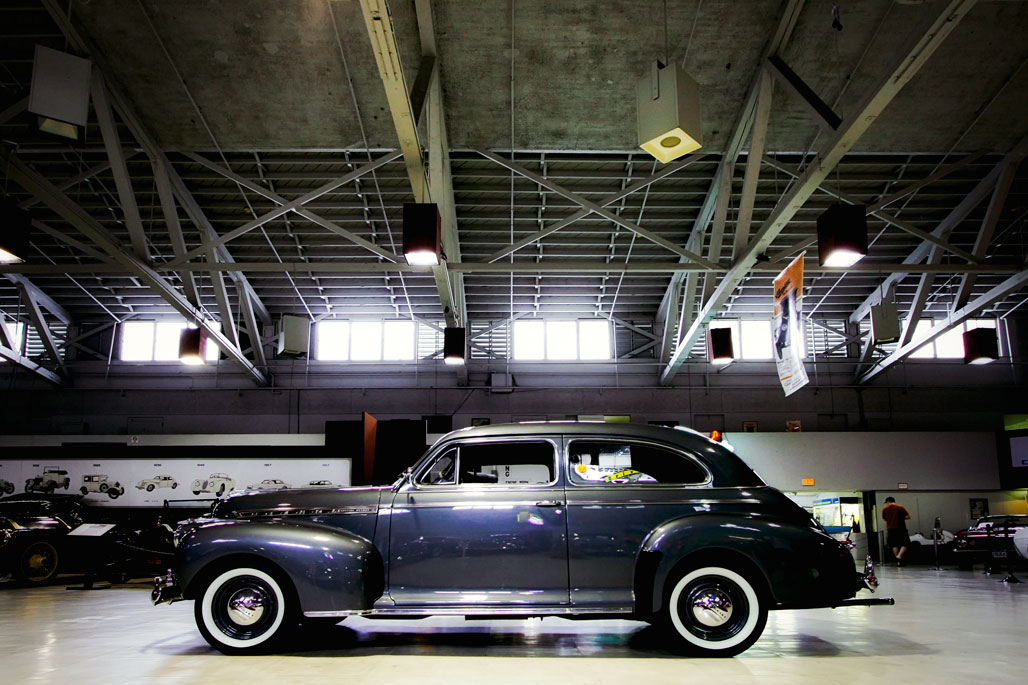 How I made this shot: The above photograph was made at the San Diego Automotive Museum and was somewhat underexposed with an exposure of  1/40 sec at f/4 and ISO 400 and a minus two-thirds stop exposure compensation. (What was I thinking?) It was shot with a Canon EOS 50D and a EF-S10-22mm f/3.5-4.5 USM lens at 14mm, a setting that could not quite make the wheels perfectly round. I tried to somewhat compensate for by using Photoshop’s Transform command but my efforts were “close but no cigar.” The image was tweaked using Exposure Software’s Exposure X5’s Ektachrome film emulation and enhanced with Color Efex Pro’s Glamour Glow filter.

The truth is that my finished image is not radically different from the underexposed image I originally made or what you may be have seen with your own eyes in the San Diego Automotive Museum itself. Maybe that’s why I don’t understand the SOOC movement; it seems akin to asking Edward Weston if you could look at his negatives to compare them to the finished print of Pepper #30 asking why he couldn’t just make a straight print. Not that mention my name or work in the same sentence as the late Mr. Weston. My friend Mark Toal answered that question for a reader of our old blog more eloquently that I could and this is what he said:

Mark: Yes, they have almost all had some post processing done to them. I shoot almost all of my images in RAW format. When you shoot RAW the camera does not apply sharpening, noise and other corrections that it does to a JPEG file. Just like when I shot film I want to be able to apply my own look to all the images that I shoot. Most of the images you see from me have been sharpened slightly, had contrast added and color corrected to add more warmth.

I worked in the photo processing industry for 30 years and almost every negative that we processed had some correction done to them. SOOC (straight out of the camera) makes no sense to me. The original image is a starting point for me to make it my original creation.

For yet another take on this subject, please read my book review of In Camera: Perfect Pictures Straight out of the Camera. My own answer to the SOOC question is simpler: It’s just a photograph that I made because I’ve always believed that photography should be fun. And that’s all there is to it.

One of my influences is the late William Mortensen. His book The Command to Look is about a completely different approach to composition and has been lovingly reprinted. While it contains some unusual, to say the least, supplementary material, Mortensen’s words and images are worth the detour. New copies are $14.60 with used starting for $9.45, as I write this. It’s not an easy read but well worth the effort.