It Was a Dark and Not So Stormy Night

If during the past few days you’ve been missing me on social media, including Google+, Twitter and Pinterest, it’s because I have been out of town on a secret, photographic mission. More information will be forthcoming next month on my blogs as well as the digital version of Shutterbug. I’m back in the office today, so stay tuned.

First, there is a thrill in overcoming the technical obstacles that typically prevent you from capturing a well exposed image. Secondly, photographs made under conditions different from “normal” have a more eye-catching look. And finally and most importantly, taking the time to search out dramatic lighting conditions let you produce photographs that are different from the rest of the pack.

Most photographers know the ingredients for making images under less than ideal lighting conditions: You can use a tripod-mounted camera with high ISO settings and slow shutter speeds to create time exposures that create images that overcome the cliché and can, if you’re lucky, produce art. 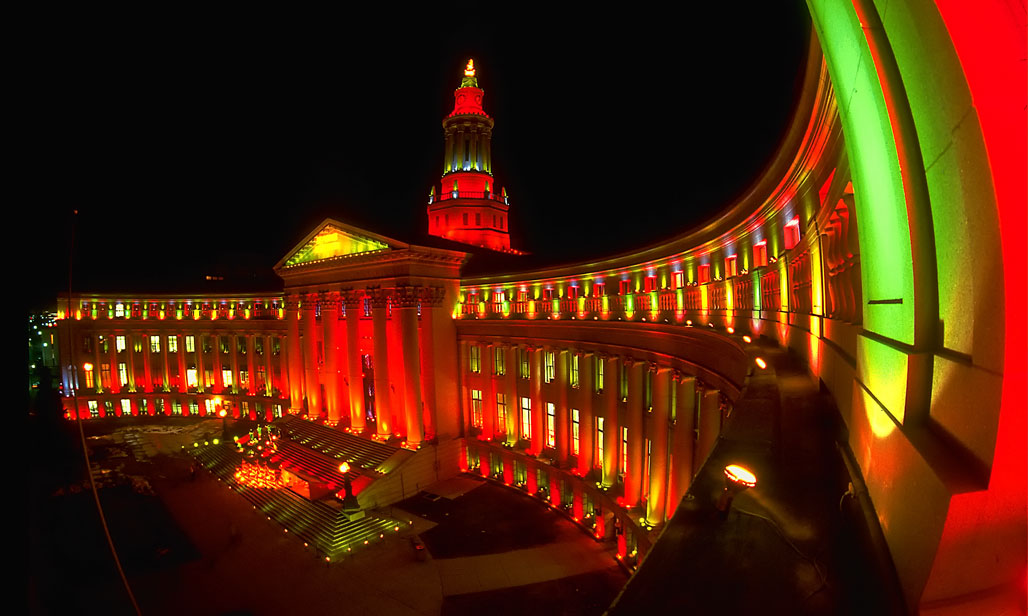 Then there’s the exposure challenges. Scenes that contains an extreme rage of brightness and darkness  give a camera’s light meter fits and nighttime holiday lighting is a perfect example. The human eye easily adapts to the colorful lights hung on buildings and trees but your camera’s meter generally reads the larger dark areas first, instructing the camera to expose for a perceived lack of light. The resulting image will typically be overexposed and the brightly colored lights will lack detail.

You can overcome this problem by taking a meter reading from an area that’s well lit by the lights. Move in close and meter it, using a hand-held meter or locking the reading into your camera’s built-in meter. You can also put on a longer lens and take a closer reading from camera position. This produces similar results without having to move in close, which isn’t always possible. Another method involves bracketing several different exposures of the same scene.

How Barry made this shot: Denver’s City and County Building has traditionally been illuminated at Christmas time by a striking lighting display. Because of the size of the large building, most photographs made of the building are made from a distance. This photograph was shot on a ledge outside a window on one of the building’s upper floors. To make this photograph, Barry asked for and was given permission and an escort accompanied him remaining with him throughout the shoot. A Gitzo tripod-mounted Nikon DSLR with a 16mm f/2.8 fisheye lens was used to capture the entire building. Exposure was five seconds at f/8 and ISO 400.

Along with Pulitzer Prize-winning photographer Barry Staver, I’m co-author of Better Available Light Digital Photography that’s available from Amazon for $21.87 prices with used copies selling for around five bucks, as I write this. The Kindle version is kind of high for some reason (not Barry and I to be sure.)