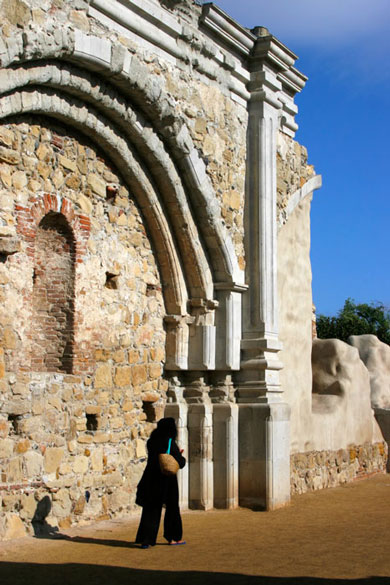 During the later 19th and early 20th centuries, Pictorialism was an aesthetic movement that dominated photography. There’s no standard definition of the term but in general it refers to a style where the photographer has manipulated what would otherwise be a straightforward photograph as a means of creating an image rather than merely recording one.

I’ve long been a fan of a pictorialism style that’s more concerned with the aesthetics and emotional impact of the image than just the technical specifics. If you’ve been reading this blog for a while you know that used traditional darkroom techniques in the digital darkroom to add artistic touches that sometimes emulate painting and sketches. 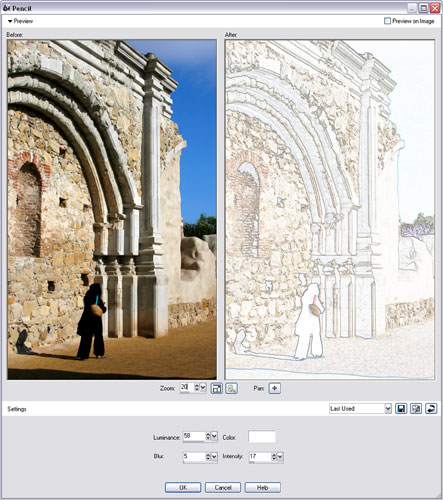 of artistic images we’ve always dreamed of producing, such as today’s featured photograph.

How I made the original shot: The photograph was made at Mission San Juan Capistrano late in the day, around 5:20 PM, so the colors are slightly warmer than if it had been made at midday but the drama and long shadows would have been missing in the flat, harsh midday light. The camera used was a Canon EOS 50D with EF 28-135mm f/3.5-5.6 IS USM lens (at 41mm) with an exposure of 1/640 sec at f/16 and ISO 200. 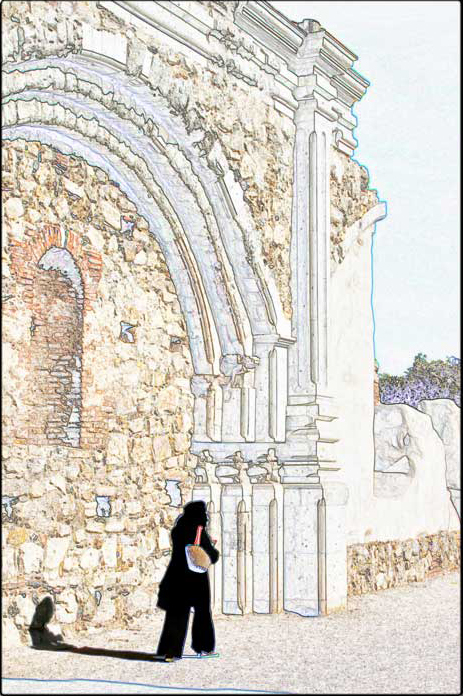 After slightly cropping the bottom of the photograph, I opened the image in Corel’s Paintshop Pro, I created a duplicate layer (Layer > Duplicate) then applied the Pencil effect (Effects > Art Media Effects > Pencil.) The check box that lets you preview the effect on the image includes a dice icon that randomizes the parameters. I keep clicking the dice until I got an effect that I liked, which is often a technique I’ll use when presented with the “dice” option. Tip: Photoshop users might try the Colored Pencils filter for a similar look.

As you can see in the above right manipulated shot, the woman (actually my now-late mother-in-law) is seen as an outline but I wanted her to have more weight in the finished image.

To do that, I used PSP’s Eraser tool to erase part of the top (manipulated) layer but not her shoulder bag to allow her black outfit as well as her shadow to show through from the bottom layer.

My book Creative Digital Monochrome Effects is available from Amazon with new copies at $23.30 with used copies starting at a little more than two bucks, as I write this. There’s no Kindle version available, sorry.