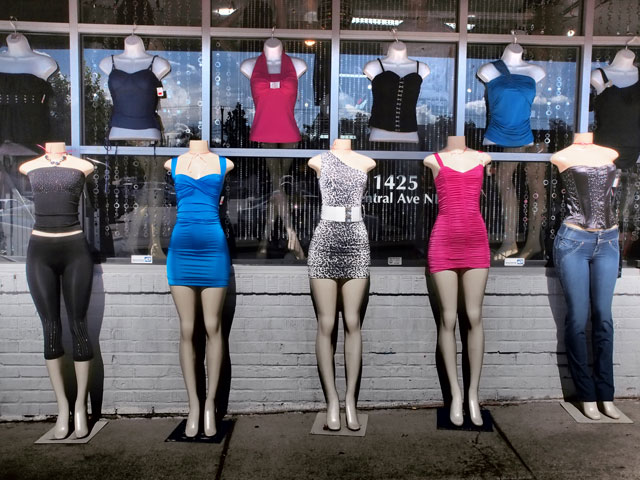 If you haven’t already figured it out, I have an affection for New Mexico, Mary is always talking about moving out of state; she prefers Arizona but I’m allergic to temperatures higher that 120. I prefer New Mexico, especially, Albuquerque, where I made today’s featured image, at least the original JPEG file that’s shown at right…

You know how it is: You drive by something and say to yourself, “I’ve gotta make a photograph of that…some day but for some reason you never get around to it. Once upon a time, my friend photographer Don Feltner gave me a round wooden coin that looked like a “wooden nickel” except “tuit” was written on it. So since I had a round tuit to give you, this photograph was going to be my round tuit shot but, of course you know there would be some twists and turns along the way.

A few years ago, when I was in Albuquerque with Mary, we were driving past this clothing store that had these mannequins standing outside and she told me, “you gotta take a picture of that.” When we drove by the store later in the day, the store was closed and all of the mannequins had been taken inside. But I persevered, so the next time we were in the Nob Hill area, we made a detour and the mannequins were outside but it was a very busy day with lots of pedestrian and automobile traffic. So Mary dropped me off and drove around the block while I tried to shoot. 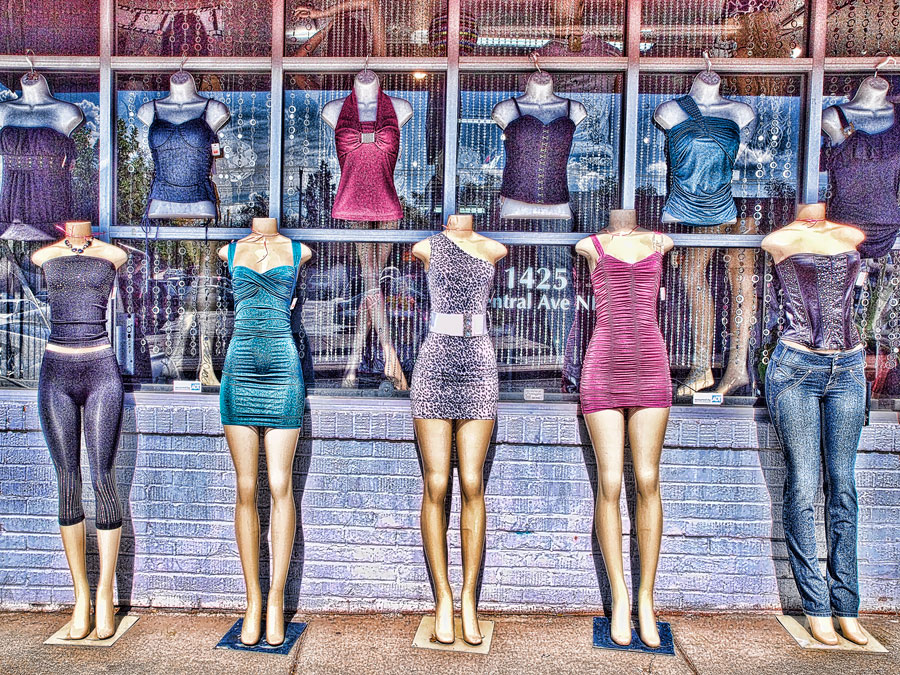 In the time it took here to drive around the block, I managed to make two shots, one in black and white for whoever knows what reason. The color image file is shown at right and was made with an Olympus E-5 Four-thirds (not Micro Four-third but with the same size sensor) and 17mm f/1.8 lens. Exposure was 1/640 sec at f/9 and ISO 320, which seems a bit underexposed to me.

But it was only when we got back home to Colorado that I decided to re-imagine the image, by first leveling it a bit using Photoshop’s Transform tool. As I look at it now, I could have done a better job of composing the original image. Next I corrected for underexpose using the technique explained here. Then I used Topaz Lab’s Adjust plug-in to tweak to the finished image to achieve what you see above.

If you enjoyed today’s blog post and would like to treat me to a cup of Earl Grey tea ($2.50) and if you do, thanks so much.

Along with photographer Barry Staver, Joe is co-author of our book  Better Available Light Digital Photography with new copies available from Amazon for $21.50 and used copies starting at the giveaway price around six bucks, as I write this.