There is more to black and white photography than simply an absence of color. Maybe I wouldn’t feel this way if the first photographs had been made in color but that didn’t happen and, like many photographers of my generation, I grew up admiring the works of W. Eugene Smith and other black and white photojournalists who photographed people at work, play or just being themselves.

Sometimes the nature of a portrait subject demands that the image be photographed in black and white. Arnold Newman’s portrait of composer Igor Stravinsky could never have been made in color and have the same impact it is has as a monochrome image. 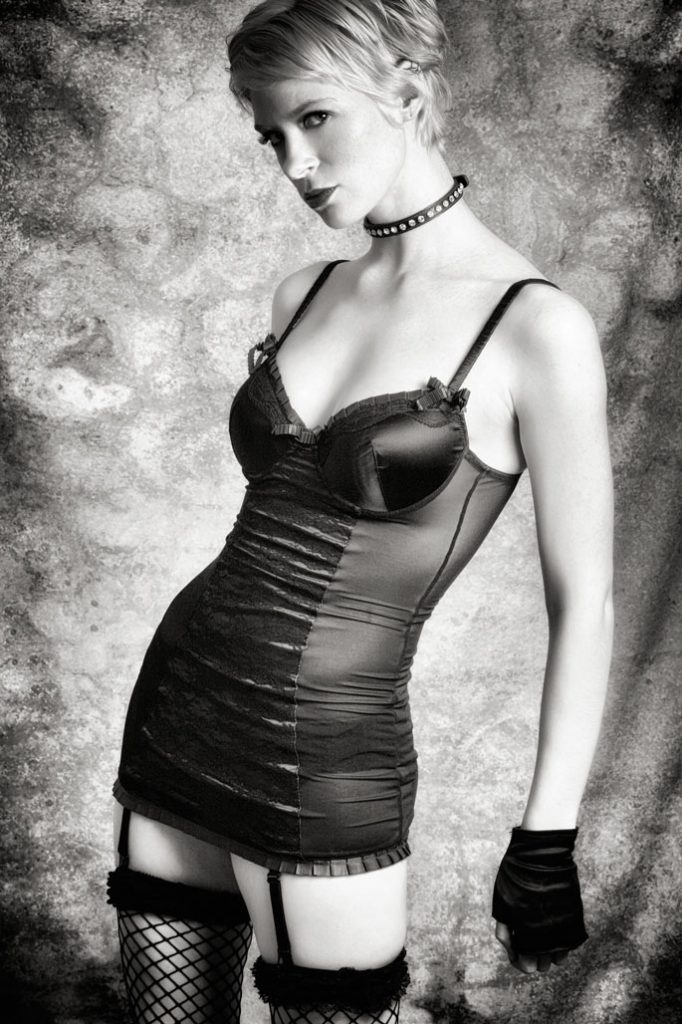 Black and white is a wonderful media for making glamour portraits because the lack of color simplifies the image, causing you to focus on the real subject of the photograph instead of their clothing or surroundings.

There are also the trendy aspects associated with creating images in black and white. TV, movies and fashion magazines periodically rediscover black and white as a way to reproduce images that are different from what’s currently being shown. Right now, many portrait and wedding photographers tell me they’re seeing a higher than normal demand for monochrome than previously was the case.

How I made this shot: I photographed the dynamic model Pam Simpson in my 11×15-foot home studio using a Paul C Buff DigiBee mounted with a Plume Ltd Wafer softbox that was placed at camera right. An inexpensive ($30) 30-Inch 5-In-1 Westcott reflector is at camera left for fill. Background used was one of Silverlake Photo’s Colorsmacks mounted on my falling apart JTL background stands. It was originally shot in color during the first photo session I had with Pam. Camera used was a Canon EOS 5D Mark I and EF 85mm f/1.8 USM lens with an exposure of 1/125 sec at f/13 and ISO 100. The color portrait was converted to color using Silver Efex Pro

Joe Farace’s Glamour Photography is full of tips, tools and techniques for glamour and boudoir photography with new copies available from Amazon for $20.97, as I write this. Used copies start at an amazing $2.49 and the Kindle version is $11.99 for those who prefer a digital format.