So the Emperor turns to me and asks, “So what kind of digital camera should I get Darth Vader for his Birthday?” And so I says, “Mirrorless, of course.” 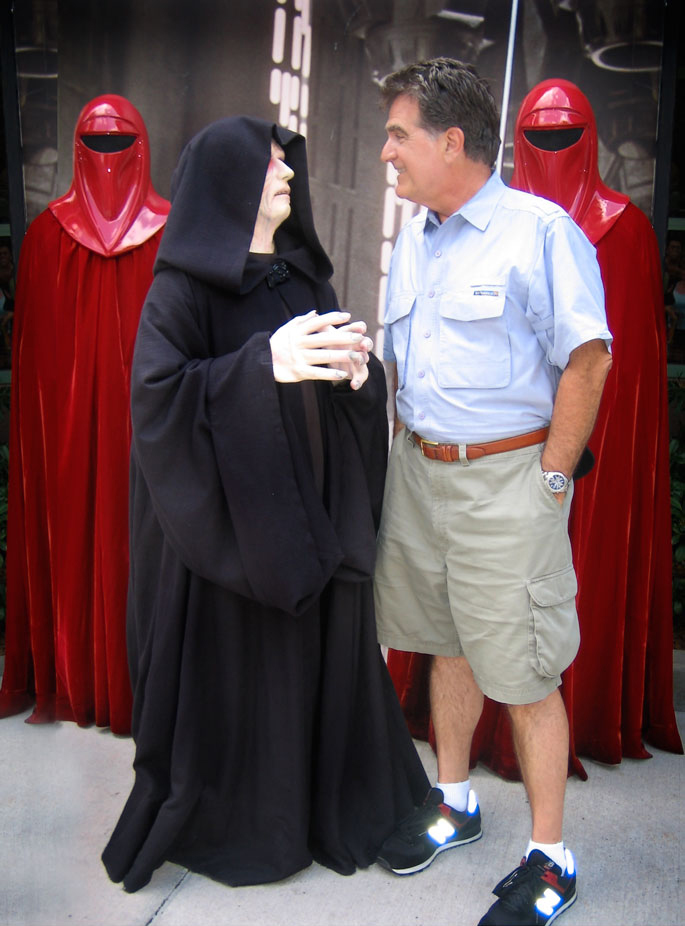 Even if you don’t know a Wookie from an Ewok, you might want to know that Star Wars Day is an unofficial  holiday in May that celebrates the Star Wars movie franchise and is observed by fans of the movies, including moi.

The date was chosen for the easy pun on the catchphrase “May the Force be with you” aka “May the fourth be with you.”

In 2011, the first organized celebration of Star Wars Day took place in Toronto, Ontario, Canada at the Toronto Underground Cinema. Since 2013, Disney Parks have celebrated the holiday with many different Star Wars events and festivities, which is where Mary shot the photo of me (at left) with Emperor Palpatine also known by his Sith identity as Darth Insidious. It was a funny situation, while many Star Wars characters were at the Disney event, the poor Emperor was being ignored by all the rest of the people at the theme park, so I just had to stop by and say Hi!

How she made this shot: Mary used her Zen Grey Canon PowerShot SD20 (she still has this lovely little camera) with an auto exposure of 1/100 sec at f/2.8 at ISO 50.

If you enjoyed today’s blog post and would like to buy Joe a cup of Earl Grey tea ($2.75, Starbucks raised the price of Earl Grey), click here. And if you do, thank so very much.