Monolights, as I wrote about previously, combine a studio light’s power supply and flash head into a single package. Another, different approach is used by power packs and head systems that separate these components into individual units that can be mixed and matched to create different kinds of lighting set-ups.

Because there’s no internal power supply in the flash heads of a power pack and head system, heads in these systems can be smaller and some are downright tiny allowing you to place them in locations where larger monolights might not fit. Because these heads can be smaller than a monolight, there’s room for cooling fans without the head size becoming too large or the fan too big and noisy.

Another advantage is the power supply can control more than one head. Usually the output for each flash ca be controlled separately in either symmetric or asymmetric configurations. The power supply itself can, on the other hand, be larger because the design needn’t be concerned as much about heat buildup affecting the flash head giving you the ability to connect more flash heads. But sometimes, as I have found, you can get by with just one light head as this portrait lighting set-up (at left) demonstrates. 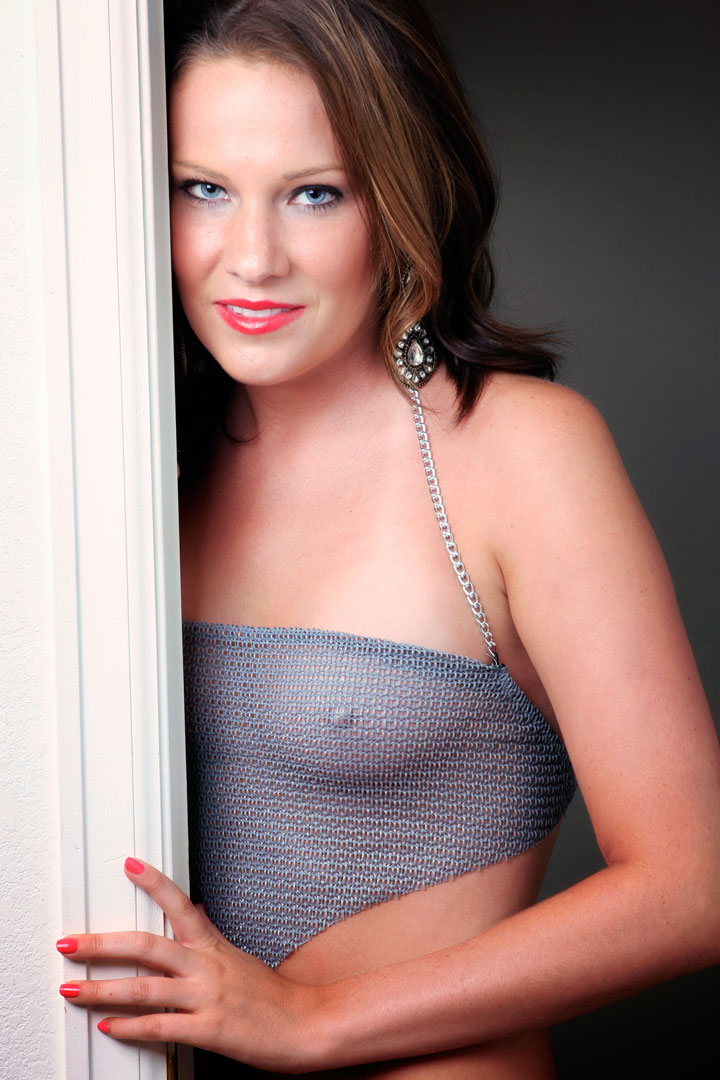 How I Made This Shot: The portrait of Colleen Breanne (at right) was made while she was standing in the doorway to my home studio. It was shot using only a single Broncolor head with 28-inch softbox attached and placed at camera left. No reflectors were used,

The final photographs was made using a Canon EOS ID Mark IIN and my favorite EF 135mm f/2.8 SF lens with an exposure of 1/60 sec at f/10 and ISO 100. The image file was retouched using my standard techniques with some light burning and dodging created using the layers that are produced by PhotoKit 2.

Something to think about: When using any kind of studio flash system you’re eventually going to encounter this buzzword: Lighting Ratio is the difference between the intensity of the main or key light and the fill light that’s falling on your subject. (I know there can also be tertiary lights that serve other purposes such as adding highlights to the subject’s hair or illuminating the background but that’s how lighting ratio is typically calculated.) Understanding this concept can especially be important when using power packs with asymmetric controls that can be set to produce different output intensities in each light head.

If you’re interested in learning how I shoot portraits and how I use cameras, lenses and lighting in my in-home studio and on location, please pick up a copy of Studio Lighting Anywhere which is available new from Amazon.com with for $31.89 and used starting at seven bucks, as I write this. The Kindle version is $19.99 for those preferring a digital format.