The Arapaho and Roosevelt National Forests and Pawnee National Grassland is located in north central Colorado. The forests and grassland encompasses 1.5 million acres and extends north to the Wyoming border, south of Interstate 70 to Mount Evans, west across the Continental Divide to the Williams Fork area and includes short grass prairie east of I-25. 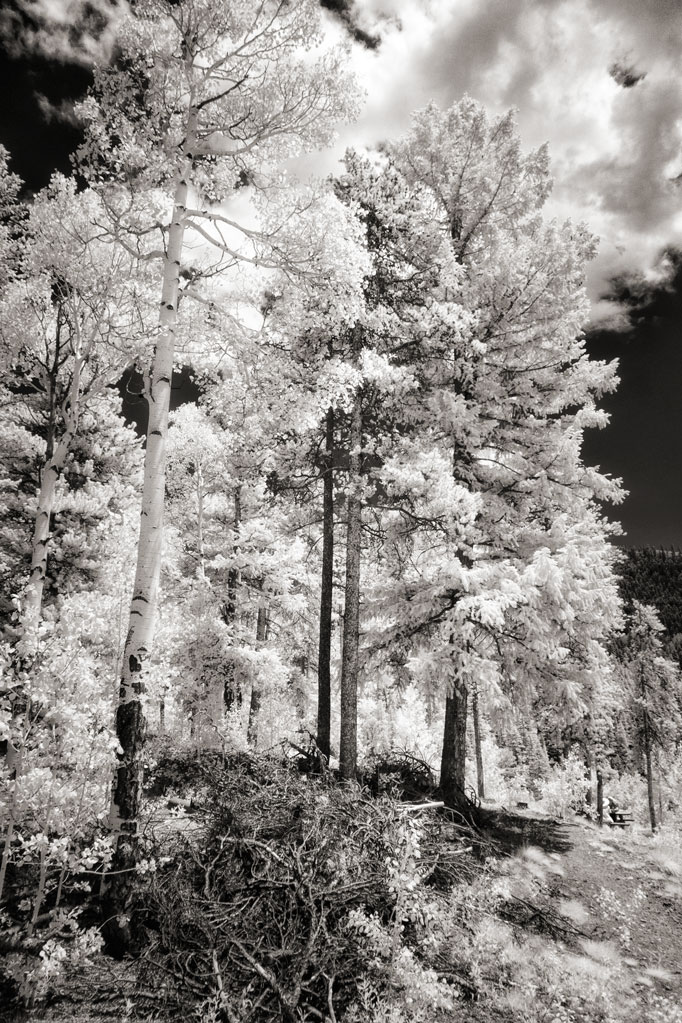 How I made this shot: The image at left was made in the Arapaho National Forest, not far off the road to Mount Evans in Colorado. It was shot using a Panasonic Lumix G6 that had been converted to infrared-only operation by LifePixel, It was shot using a Lumix G Vario 12-32mm f/3.5-5.6 lens and an exposure of 1/400 sec at f/13 and ISO 400.

Regular readers will recognize that this image looks different from some of the other images that I’ve made with the Lumix G6 that had been converted with LifePixel’s Enhanced Color filter. Even the RAW files look different being more similar to images made with the Standard IR filter. And not just this image but all of the others I made that day, which got me to thinking—why?

The forest is dominated by Englemann Spruce, Subalpine Fir and Limber Pine with some Aspens. Three of these are evergreen trees and do not exhibit the Wood Effect in infrared photography the same way that deciduous trees do. And I’m also not so sure that elevation—we were at 10,500 ft—plays into the infrared effect somehow, since all of the reference material I could find about elevation and infrared photography related to aerial photography. If anybody who knows anything about this topic, I would appreciate some advice.

Because inquiring minds want to know, the next time I head into the Rocky Mountains, I plan to bring along my Lumix G5 that was converted with LifePixel’s Standard IR filter and make some side-by-side comparisons, which I will share with you here, whatever the results may be.

My book, The Complete Guide to Digital Infrared Photography is available from Amazon for with new copies selling for $25.00 and used copies starting at $11.98, as I write this. Creative Digital Monochrome Effects has a chapter on IR photography and is available from Amazon with new copies at $33.65 with used copies starting at a little more than two bucks, as I write this.