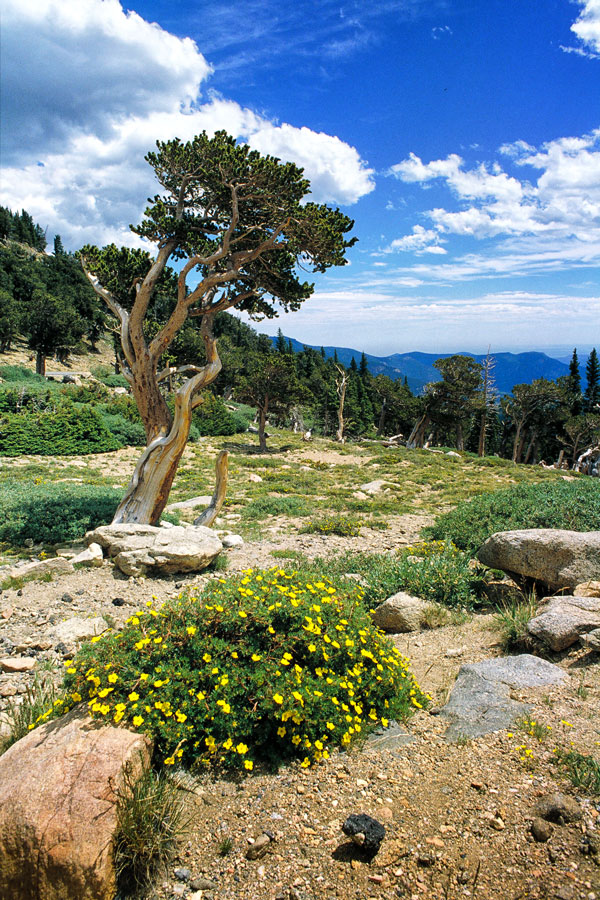 When I was making the image featured on Tuesday’s blog post, one of the photographers on our trip asked me, “Why are you always making pictures of trees.” The short answer is because I like too, which brings me to today’s photograph.

The bristlecone is one of three species of pine trees and all three species are long-lived and highly resilient to harsh weather and bad soil.

One of those species is Pinus ponderosa, commonly known as the ponderosa pine, of which I can see several looking out my office window here on Daisy Hill, is a large species that’s native to the western United States and Canada and is the most widely distributed pine species found in North America.

Bristlecone pines grow in scattered subalpine groves at high altitude, such as Mount Evans in Colorado where the image at right was made.

The tree’s name comes from the prickles on the female cones. Another one of the three species, Pinus longaeva, is among the longest-lived life forms on Earth. Methuselah is a 4,848-year-old bristlecone pine tree growing high in the White Mountains of Inyo County in eastern California.

Despite their  age and low reproductive rate, bristlecone pines tend to occupy new open ground but they compete poorly in less-than-harsh environments, making them difficult to cultivate. They do very well, however, where most other plants cannot even grow, such as in rocky soils in areas with virtually no rainfall.