Shooting portraits outdoors mean you’re going to have to be creative about where and when you shoot and look for places that will accommodate to your and your subject’s photographic requirements but even doing research doesn’t mean you won’t encounter some problems. 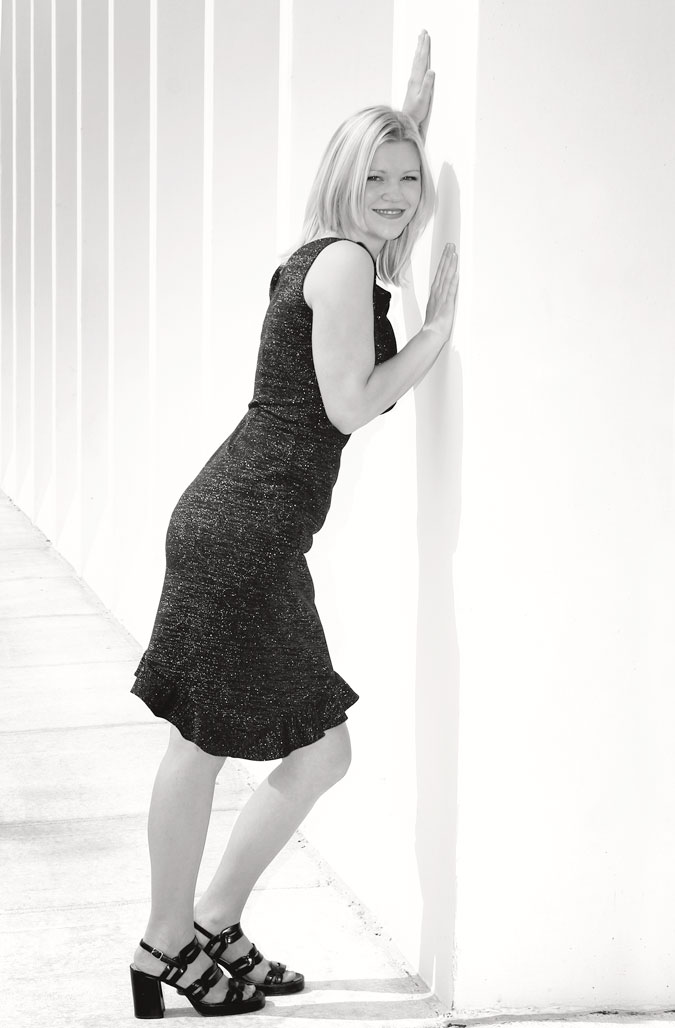 It seems like shooting almost anything outdoors in post-911 America has made many people, especially those wearing badges, sensitive about photography and photographers and sometimes they can overreact to what is really a harmless situation.

At left: I was shooting a model portrait of a fully clothed Jennifer Groen outside a county office building and after ten minutes a polite Sheriff’s deputy asked us to move along because we were “disturbing people working in the building.” (I suppose that could be true or not.) We managed to make twenty-two shots and while I would have liked to have made more, I agreed to leave. My personal rule is never argue with anyone who carries a gun.

This is one of the photographs that got the sheriff’s deputy attention who asked us to leave. Unfortunately, I never got the shot that I was trying to achieve but this one pose is close to and gives you an idea of what I was going after—black dress, white building—you get the what I was going for.

The above image was shot using Canon EOS 60D and a EF 22-55mm lens with as exposure of 1/200 sec at f/11 and ISO 100. A 550EX speedlite was use as fill. An interesting postscript was that after Jennifer and I were asked to leave, we moved the shoot two blocks away to a city building were she posed on a ledge just outside the City Court bailiff’s office. Nobody said a thing but is was such a public space space that we had lots of comments from the Peanut Gallery as people drove by.

What are your rights under these kind of situations? Bert P. Krages II attorney-at-law has developed a one-page PDF containing information about what your rights are when stopped and confronted by authorities. As the author of the incredibly useful book, Legal Handbook for Photographers, Mr. Krages is knowledgeable about photographer’s rights. I would like to thank him for producing a document that explains your rights and legal remedies when confronted by law enforcement or others when shooing but more importantly how you should handle these kinds of confrontations. Print a copy of the PDF and keep it in your camera bag—just in case.