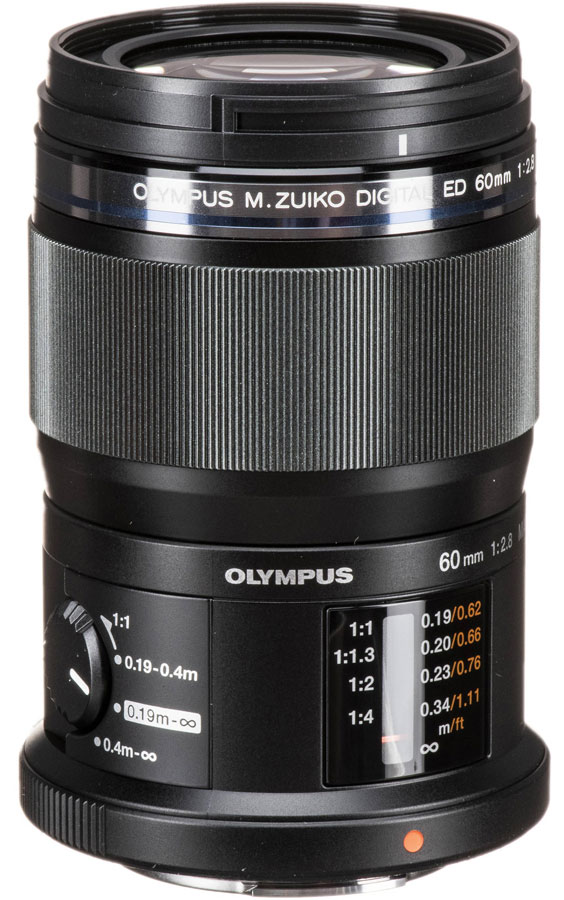 Inspired by Canadian photographer Don Komarechka I decided to try some macro photography and if you are not already familiar with photography’s Mr. Wizard, plrase check out his website.

I own a couple of Canon EF macro lenses but didn’t have one for my Micro Four-thirds system and after looking at my options I settled on Olympus’s M.Zuiko Digital ED 60mm f/2.8 Macro lens. I purchased it from Olympus’ furbished lens site to, you know, save a few bucks and save I did, saving $80 over the price of the lens if purchased from my favorite on-line retailer. Oly’s Digital ED 30mm f/3.5 macro is cheaper ($224) than this lens but its 60mm equivalency seems like it would require a too close-to–subject working distance, which didn’t appeal to me. And I thought the 60mm lens’s 120mm equivalent also might make it a good portrait lens as well. (A subject* for a future post.)

The 60mm macro lens’s optical design includes an extra-low dispersion element to suppress chromatic aberrations and color fringing. It has one E-HR (Extra-High Refractive index) element and two high refractive index elements to control spherical aberrations and distortion. A ZERO (Zuiko Extra-low Reflection Optical) coating was applied to individual elements to minimize lens flare and ghosting for improved contrast and color fidelity. but no lens hood is included and the LH-49 Sliding Lens Hood costs, in typical Olympus fashion, $43.65. I’ll have to put it on my list for Santa. 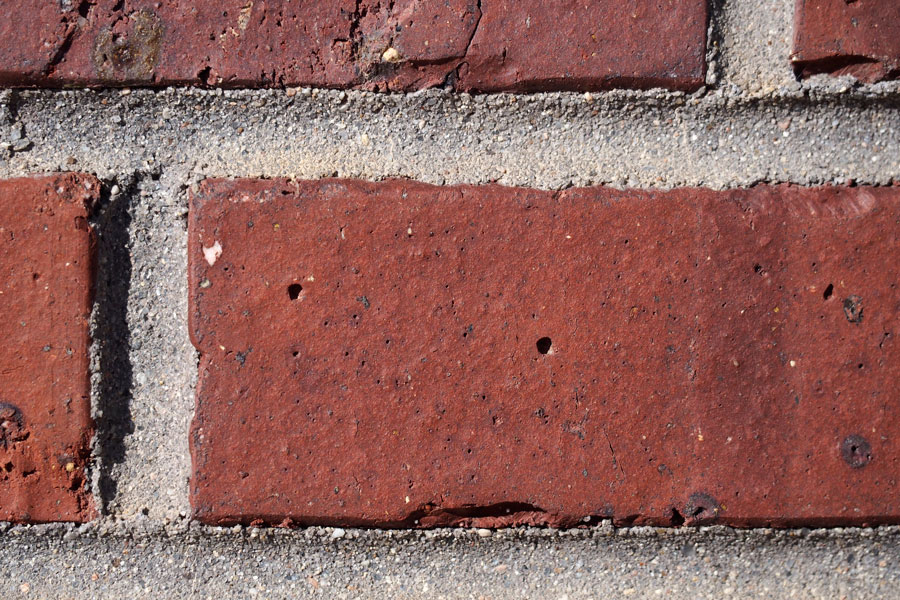 Brick Wall Test: I mounted the M.Zuiko Digital ED 60mm f/2.8 Macro onto my Olympus E-M5 Mark I camera body and headed out to my wall of well-laid bricks in Downtown Parker, Colorado. Although this is not a zoom lens I made two sets of test shots: The first one was made at a “normal” distance and the second at 1:1 ratio. The lens is reasonably sharp at f/2.8 but as you stop it down becomes even more so until you hit the f/8 sweet stop, at which point it is nothing short of amazing. There is no vignetting at any aperture. At 1:1 even at f/2.8 there was virtually no difference between its sharpness wide open and f/8, being sharp corner-to-corner with no hint of vignetting. This is wonderful performance for such a reasonably priced lens.

The 60mm lens barrel has a window showing scales when working at 1:1.3, 1:2, and 1:4 magnifications and a Focus Limit Switch for more controlled autofocus performance. The lens has a wide not-as-grippable as I may have liked focus ring for manual focusing, something that I’ll be talking about in a future post. It also has an internal focusing mechanism—and it’s really fast—that maintains the overall lens length while focusing when photographing close-up subjects. Like a lot (maybe all) Oly lenses, it has the Movie & Still Compatible system for quick, quiet, and smooth AF for photo and video applications. A splash proof and dust-proof construction helps make working with the lens in inclement conditions less stressful. It has a rounded seven-blade diaphragm contributes to a smooth bokeh quality. 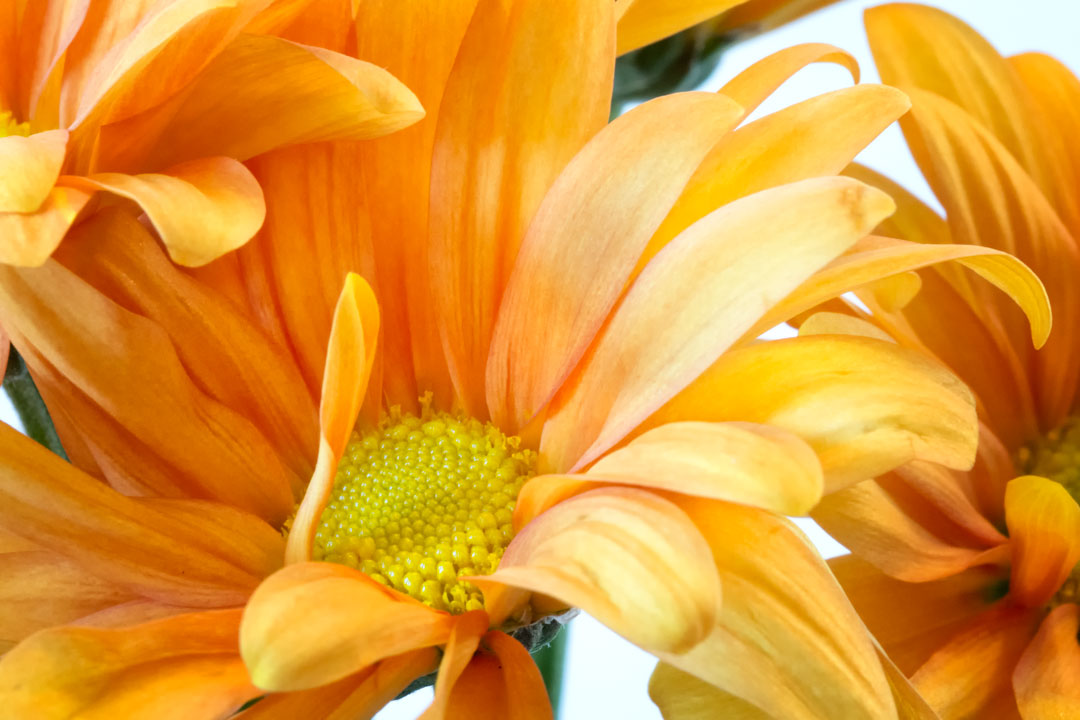 How I made this shot: For my next test, I stopped by a local grocery store and bought the cheapest bundle of flowers they had. Initially I mounted the Olympus E-M5 Mark I onto an inexpensive Macro Focusing Rail, which in turn was attached to a 25-year old but still sturdy Manfrotto tripod. But the Focusing Rail proved to be useless and none of the pictures I made with it were sharp; there was clearly camera motion. So I mounted the camera directly onto the tripod to produce the image at right. The Aperture Preferred exposure was 1/6 sec at f/16 and ISO 1600. A Manfrotto Micrometric Positioning Sliding Plate will have to be another item on Santa’s list.

The ED 60mm f/2.8 Macro lens offers a maximum 1:1 magnification for true macro lens performance, although because of the smaller sensor of the Micro Four-thirds system it produces a “perceived” ratio of 2:1. The lens has a 7.5-inch minimum focusing distance, which on the surface is not that impressive but the focal length, I think, more than makes up for that. By comparison, Oly’s 30mm macro lens focuses to 3.74-inches but at that distance you would be getting in the way of your light.

*I’m looked for models for a socially distanced portrait shoot to be made with this lens. Depending on the weather, we can shoot outdoors or my in-home studio. Since this health crisis started, we have had our home and home studio professionally cleaned and sanitized five different times. Click Contact and let me know if you’re interested.

If you liked today’s blog post and would like to treat me to a cup of Earl Grey tea ($2.50), please click here. And if you do, thanks so much.