Certain people have certain ways of focusing on things, and some arrange their lens to a pinhole in order to focus only on their goal. Others have a giant lens, and they take in the whole panorama. I was that pinhole kind of person.—Wendy Whelan 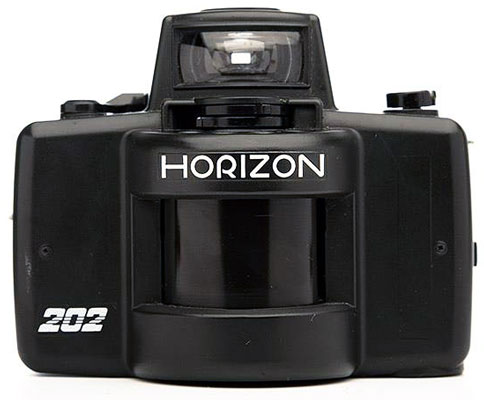 I don’t think it was a Christmas present, but once upon a time my old pal Jason gave me a Russian-made Horizon 202 rotating lens panoramic camera as a gift. The Horizon is an all-mechanical camera, no batteries included, no batteries needed.

I’ve always been fascinated with wide-screen images and really like Jeff Bridges’ book of panoramic images he made on the sets of some of the movies he’s appeared in using a Widelux camera.

Having a 35mm camera with a 120-degree angle-of-view on a 24 x 58mm film format and with a 28mm focal length lens changes your way of looking at images and framing them. When combined with what must charitably be called only an “approximate” view as seen though the viewfinder and no focusing capability—I guess that’s tough to do with a moving lens—the experience brings spontaneity and maybe even a little inspiration into your photography. I’ve seen new Horizon 202’s for sale on eBay for as little as $100-150 and don’t think there’s a cheaper way to get into panoramic film photography; maybe the 120 Pan Panoramic Medium Format Camera, And it’s fun too.

My film photography inactivity is about to change drastically as I have spent the last several weeks scouring eBay and trying to make up my mind between several different film cameras: There’s a black body Olympus OM-4 that I’ve always wanted, the other is the Minolta SR-1 with external meter, which was the first SLR that I owned, and then the Yashica FX-3 SLR, which is a gateway camera to the Contax system and you know how I feel about that. If you have any opinions* about which one you would like me to buy, click CONTACT and let me know.

How I Made this photo: I hadn’t shot much film during the time I owned the Horizon but did manage to photograph some cars and even made some glamour portraits using it. Here I was loading film and taking exposure readings using my Gossen hand-held meter and making these wide-screen photos. After having the Kodak T-Max 400 film processed, I hand trimmed the negatives and placed the strips in one of the film holders that Epson included with the one of their flatbed scanners. After scanning and tweaking the images in Adobe Photoshop suddenly I’m Jeff Bridges, Nash Bridges, Brooklyn Bridges or one of those guys.

Some time after shooting the above panoramic image, I upgraded my panoramic photography from shooting with the Horizon by purchasing a lightly used 35mm Hasselblad Xpan that with it’s built-in metering and auto exposure capabilities is much easier to use. The Xpan’s panoramic format measures 24 x 65mm but it also has a 24 X 36mm mode and is switchable between these modes as many times as you like on a roll of film, except when there’s only space for one 24 x 36 mm frame on the roll. Oh yes, and it shoots backwards. After loading the film, the entire roll in transported onto the right-hand spool and then moves the film backward into the cartridge as you shoot. When you finish the roll there’s not need to rewind.

I love shooting the XPan and it’s one of the few film cameras that I kept when switching to digital photography. The others are a Leica M6 TTL, a Zeiss Ikon SW, Minolta Pro 20 along with my gold-trimmed Seagull TLR. But, as I indicated above, all that is about to change…

* UPDATE: Your opinions have been duly noted. The winner of the readers suggestions was the Yashica FX-3. I completed (8/28/21) the purchase of a Yashica FX-3 Super 2000, the final improved model that was produced up until 2002. It was an eBay purchase from a 100% positive seller in Japan. The camera was shipped on 8/29/21. Look for a Film Friday update when the camera is in my hands.

Along with photographer Barry Staver, Joe is co-author of Better Available Light Digital Photograph that’s now out-of-print but new copies are available from Amazon for $21.88 with used copies starting around nine bucks.