ISO Sensitivity for You and Me

ISO (International Standards Organization) ratings are a standard method for quantifying film’s—please hold on digital’s coming—sensitivity to light. Lower numbers, such as 50 or 100, represent less sensitivity; while higher numbers, such as 400 or 800, show a film that’s more sensitive.

Digital cameras do not have a true ISO speed, which is why you’ll often see the term “ISO Equivalent” tossed around in camera specifications but manufacturers have developed technologies that make your camera’s imaging sensors respond in a manner that’s similar to how film responds to light. Digital cameras typically offer a range of ISO speeds that will vary based on a specific camera’s design but most importantly when you set a digital camera to ISO 400, you can expect a similar response to light than ISO 400 film would produce.

The Pentax K-1 Mark II, for example, has a Ricoh-developed Accelerator Unit boosting sensitivity up to ISO 819,200 for shooting in extreme low light. Think black cat in a coalmine. 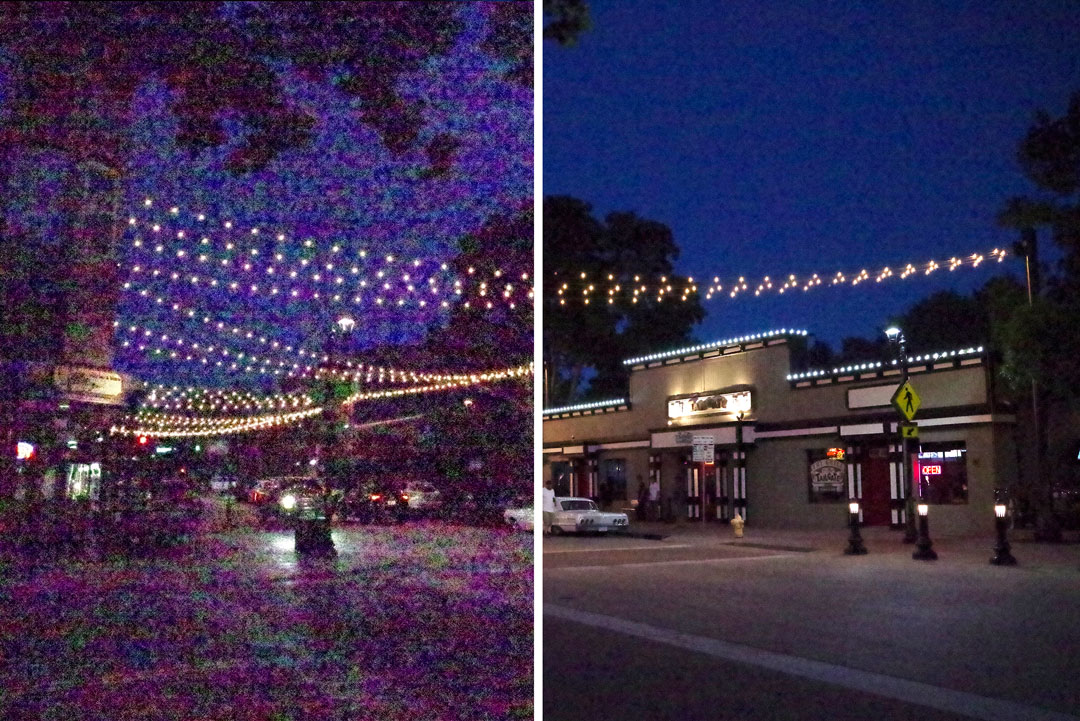 How I Made this shot: Here’s a high ISO look at Mainstreet Parker, Colorado at night. At left is the view at ISO 819,200; while at right it is 51,200. While somewhat noisy at 51,200 the image quality is still acceptable. I tried noise reduction software (Imagenomic’s Noiseware and DFine) on the original files but neither was effective in controlling the noise from either of these two image files. What you see here is JPEG’s straight out of the camera (SOOC.) Program mode exposure of the left half was 1/2000 sec at f/10 and ISO 819,200; the right half was 1/1000 sec at f/3.5 and ISO 51,200.

For more on noise, you might want to read my post Tips for Dealing with Digital Noise in Your Photographs, when you have time.

Along with photographer Barry Staver, Joe is co-author of Better Available Light Digital Photography that’s out-of-print but new copies are available for $21.50 or used copies starting around nine bucks—from Amazon, as I write this.