I first moved from Maryland to Colorado in 1982 and having spent a big chunk of my life here, consider myself, at least, a semi-native.

Today on April 12 we recognize the 38th state on National Colorado Day. Known as the Centennial State, Colorado entered the union in 1876. The first of the Four Corner States, Colorado is dominated by the Rocky Mountains. Prehistoric Colorado comes to life in the Florissant Fossil Beds were you can discover one of the most abundant deposits of fossils in the world while taking in the beauty of the Rockies. Along the cliffs of Mesa Verde, a city once thrived that was populated by the Ancient Pueblo. 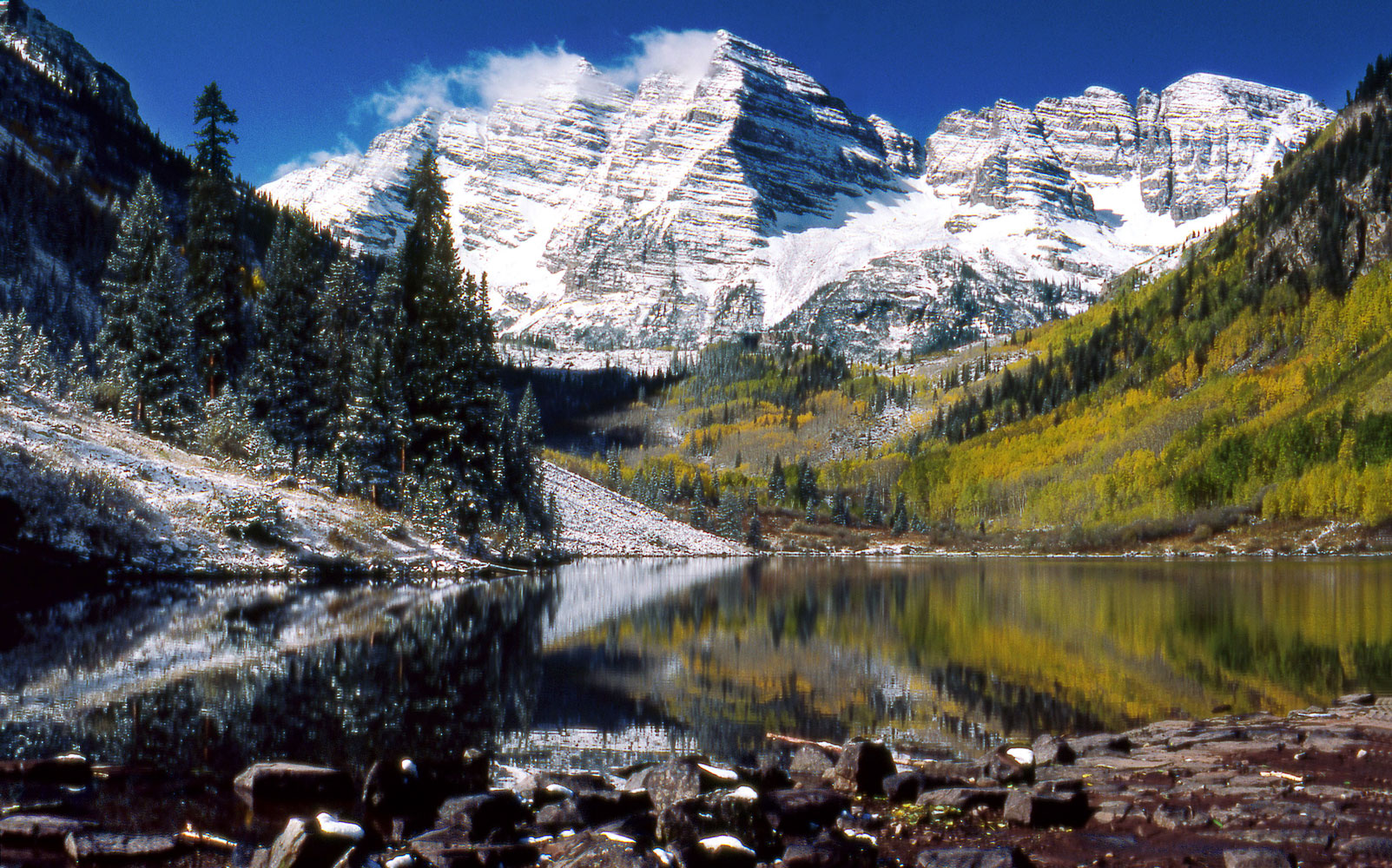 How Mary made this shot: This photograph of the iconic Maroon Bells was made many years ago with a Nikon film camera, when you could still drive down the road to the lake. Nowadays, you have park further away and take a bus to reach the lake. The Maroon Bells are two peaks in the Elk Mountains, Maroon Peak and North Maroon Peak. Elevation: 14,163 ft. Lens, film type and exposure not recorded.

The Spanish first explored Colorado seeking streets paved with gold. After Colorado became a U.S. territory, Lieutenant Zebulon Pike explored the range of this newly acquired land. A summit that he predicted would never be scaled bears his name today. Gold would be discovered setting off a fever in the mountains. A silver boom would soon follow.

Rocky Mountain National Park provides breathtaking views, trails, skiing, camping and more. With an elevation higher than any other state, Colorado counts 53 mountain peaks that reach 14,000 feet or more making the state’s rugged landscape attractive for hikers and rock climbers. Known as fourteeners in the mountaineering world, these peaks are on a climbing to-do list. Not only does Colorado have phenomenal skiing and snowboarding but because the state has the tallest dunes in North America, sand boarding is also an option.

There is no lack of historical figures in the state. From the unsinkable Molly Brown to Buffalo Bill there is something for vintage enthusiasts and those who prefer to visit the old homestead days.

And now one of my favorite trivia items about my adopted state: Colorado also stakes claim to the creation of the creamy and delicious root beer float! Those white frosty peaks of ice cream in churning dark root beer seem appropriate somehow for the Rocky Mountain State.

Postscript: Even though I am just mentally starting to recover from the last blizzard, I’m happy living here in Colorado. Mary is not. She has her heart set on moving to Phoenix. Last July, Colorado had a high temperature of 97 degrees F; Phoenix had a high temperature of 116 degrees F. I understand the appeal of getting away from snow and the upside of maybe having a pool for poolside photography but I wonder….