Focusing Doesn’t Have to Be A Problem with Infrared

Chromatic aberration is the effect that’s produced by the refraction of different wavelengths of electromagnetic radiation through slightly different angles, resulting in a failure to focus. It causes colored fringes in images produced by uncorrected lenses. 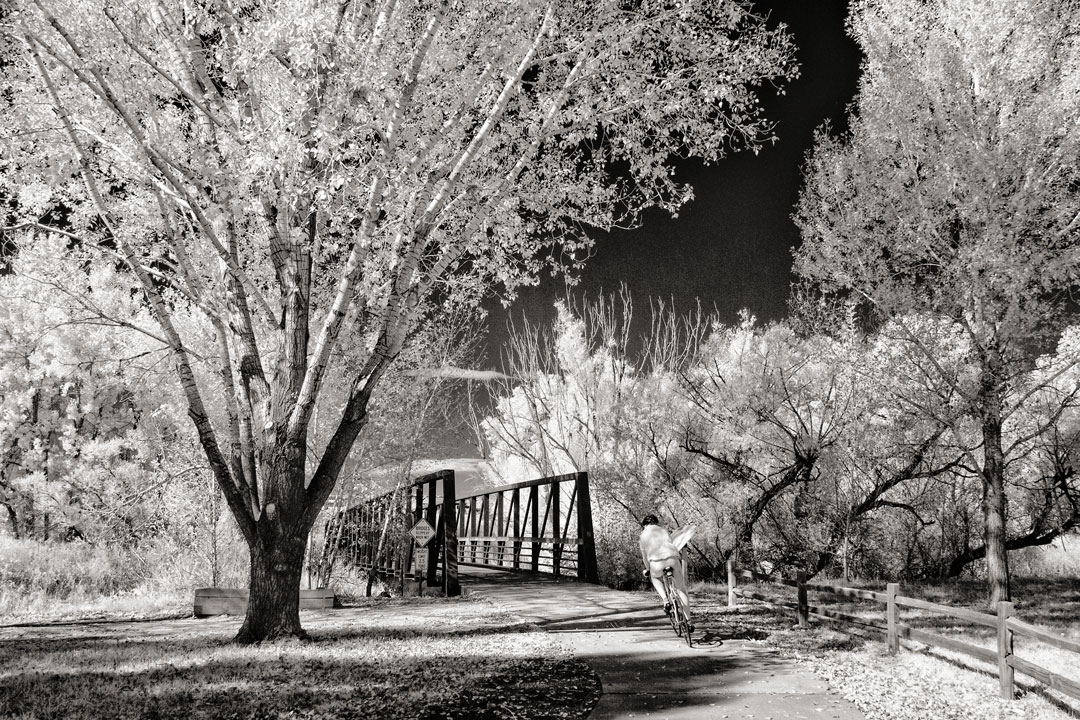 You may be surprised (or not) to learn that light waves of different color and wavelengths don’t focus on the same plane when passing through a lens. Much like light passing through a prism, the glass elements in a lens produce a rainbow of colors called chromatic aberration as light passes through them. When light passes through the Extra Low Dispersion optics that are  found in some lenses, these specially formulated glass elements minimize the amount of refraction that occurs when forming an image to produce a straighter path for the light.

The infrared difference. The problem for IR shooters is that most lenses can’t focus infrared wavelengths on the same plane as visible light. That’s why the classical advice when shooting infrared images is that it may be necessary to slightly shift the lens’s focus. Typically, the smaller the lens’ aperture and the longer its focal length the greater this shift will be. That’s why lens manufacturers used to place an infrared mark on their lenses (below right) to help you make this shift. But that is seldom the case with newer autofocus lenses. When shooting infrared with my Canon, Lumix or Olympus AF lenses, I put the camera in Aperture Preferred mode, set the lens aperture at smaller apertures and just shoot expecting the image to be in focus. And this technique usually usually works for landscape images. For action shots, like the above, I have to open the aperture a bit—but not too much. 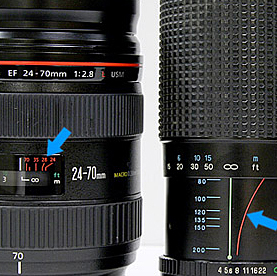 How I Made this Shot: You can photograph some action in infrared—with a converted camera. Using IR filters will produce too slow of a shutter speed. Exposure for this image was 1/400 sec at f/9 and ISO, so the shutter speed was up to the job of freezing this cyclist heading toward a bridge I’ve photographed before. Camera used was a Panasonic Lumix G5 that was converted by LifePixel using their Standard IR filter. Lens was the Lumix G Vario 14-45mm f/3.5-5.6 at 16mm. RAW file converted to monochrome with Silver Efex Pro with Platinum toning added by the now-free PhotoKit.

Hyperfocal distance is a way of focusing when shooting infrared. Hyperfocal distance is the point of focus where any object that is located between that distance and infinity is in focus. Here’s how it works: You pick an aperture, such as f/16 or f/22, then rotate the focusing ring and setting that aperture opposite the infinity mark. On a lens like the 15mm f/4.5 Voigtlander it produces a depth-of-field from about five inches to infinity, which is more than enough to take care of any focus shift that are caused by invisible infrared light waves.

My book, The Complete Guide to Digital Infrared Photography is available from Amazon for with new copies selling for $16.95 and used copies starting at $10.87 as I write this. Creative Digital Monochrome Effects has a chapter on IR photography and is available from Amazon with new copies at $23.79 with used at a little more than two bucks, as I write this.There’s no Kindle versions available, sorry.