Even though I’ve been experimenting with IR capture since the 1970’s with Kodak’s color and black & white infrared film, after I converted several of my Panasonic Lumix mirrorless cameras to infrared capture I had the same kind of euphoria that everyone having their first IR experience feels. Here’s what happens: You run around taking pictures of everything and stuff that appears mundane when captured in color but looks so different in infrared, so much that my wife Mary calls the effect “dreamy.” 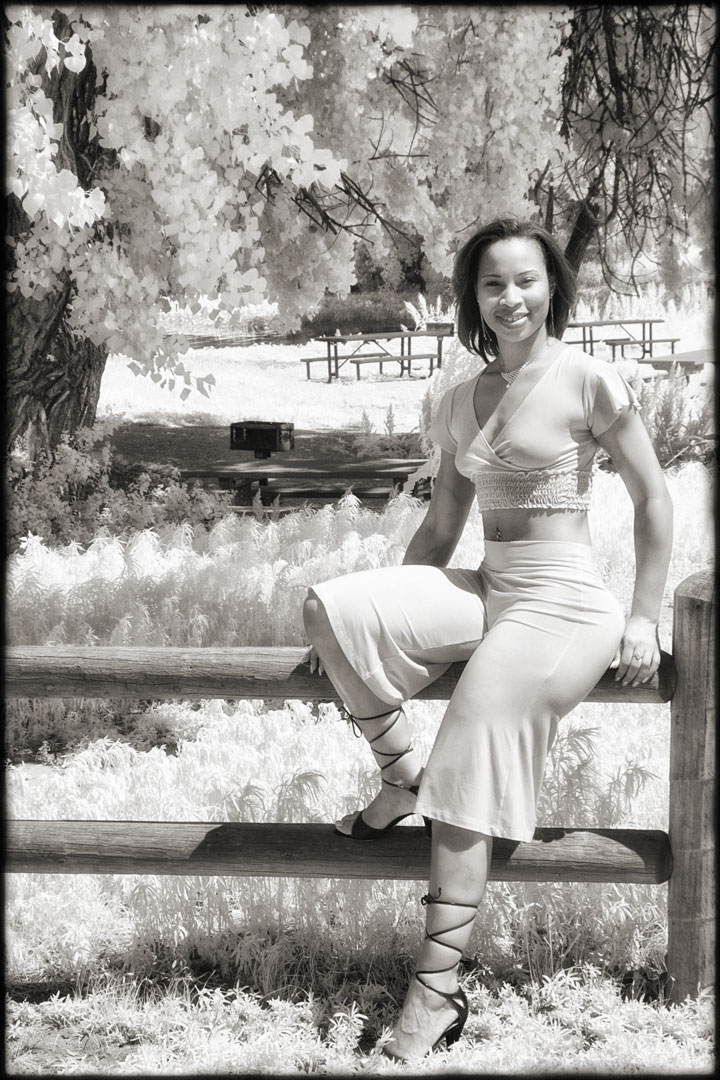 In a previous post called Infrared Portraits and Depth-of-Field, I featured an environmental portrait shot using color infrared techniques. It’s a different look from today’s featured photograph, one that some may like, while others may not. In fact that image was one of the images cut by the publisher from my book Available Light Glamour Photography. because the editor didn’t like it.

This hatred seems to be a trend amongst a certain kind of publisher, since the finished image that’s featured in this post was cut from an article I wrote for a national publication aimed at professional photographers by an editor who deemed it “demonic.” Although nobody could possibly consider the lovely Ms. Stoneman as anything but angelic. Maybe I understand… at least somewhat. Infrared portraiture is not to everyone’s taste.

How I made this shot: I photographed Y’amie in Brighton, Colorado using a Canon EOS 50D that had been converted to infrared capture by LifePixel. Lens was the wonderful but discontinued EF 22-55mm f/4-5.6 USM with an exposure of 1/320 sec at f/13 and ISO 400. The image file was processed in Silver Efex Pro with toning and borders from PhotoKit 2 with the Glamour Glow filter from Color Efex Pro added for a touch of IR glow.

Due to the general unpredictability of all infrared photography, not all IR portraits turn out this well (or at least I think so) but why not give it a try. But no matter what happens I promise that you will have fun.

does a great job with IR conversions and have done most of the conversions for my Canon DSLRs and all of my Panasonic Lumix G-series cameras. This is not a paid or sponsored endorsement, just my experience.