Laughter is the fireworks of the soul.”—Josh Billings

Nighttime doesn’t mean just that it’s dark outside. Out here in the real night photography world, there’s also a softness in the light and color is harder to perceive; in short, it’s a pseudo-monochrome time of day. Add a few fireworks and there’s the touch of color and black & white that’s the perfect combination to fit with the theme of today’s tutorial:

Step 1: This original color image of Lady Liberty was captured by Barry Staver on color slide film and obviously during the day.

Step 2: Before applying any effects to Lady Liberty I wanted to move her off the daytime background and onto a separate layer. I used the Magic Wand tool to select the blue background, then used the Inverse (Select > Inverse) to select only the stature. To place it on another layer I used the Layer Via Copy (Layer > New > Layer Via Copy) to place only the Statue of Liberty on a separate layer. Since I would not be working on this layer again, I turned off the background layer.

Step 3: The Midnight filters that are part of Color Efex Pro create the illusion of a photograph taken at night with a dark moody feeling. The Midnight filters, include Blue, Green, Sepia, Violet, as well as just plain Midnight and also soften details throughout the image. Sliders and Controls include a Blur slider that controls the soft-focus effect applied to the photograph. Brightness controls the overall lightness while Color adjusts the saturation of the original colors of the image as well as the amount of the color cast. Then there’s Contrast that controls the overall contrast range of the image.

Step 4: Next I added the nighttime sky and fireworks that were not only photographed by Bill Craig on 35mm film but in Colorado—not New York City!

Step 6: Since the sky now covers the statue I needed to move its layer below, which is just a matter of clicking on the layer and dragging it below Liberty’s layer. 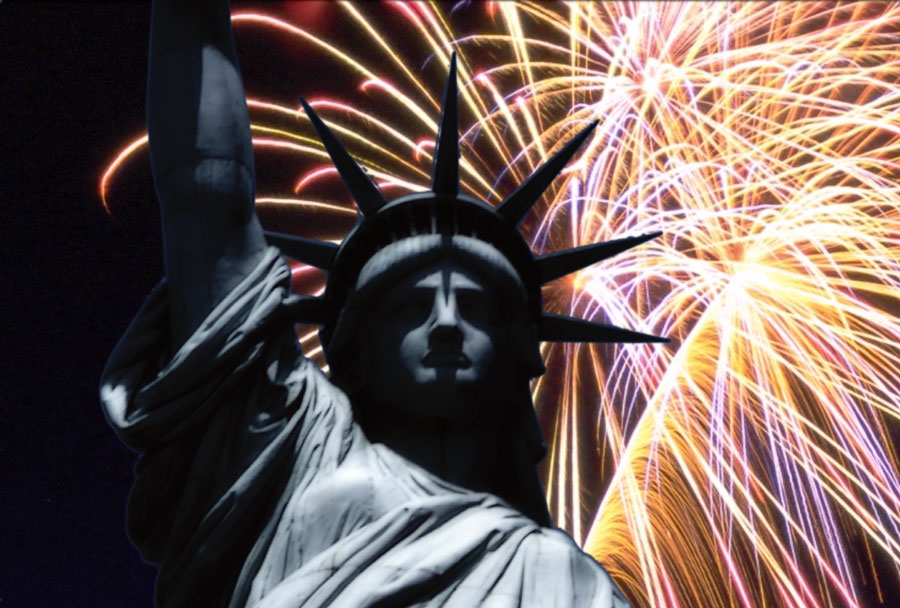 At that point it’s a matter of saving the image either as a .PSD to preserve the layers or after flattening (Layers > Flatten) and saving as a TIFF file. You can always save it as a TIFF file with layers too.

Along with photographer Barry Staver, I’m co-author of Better Available Light Digital Photography that’s available from Amazon for $21.49 with used copies starting at around nine bucks, as I write this.